Barack Obama’s house at 5046 S. Greenwood in the historic Kenwood district of Chicago can be found on the MLS system. Built in 1910 and sitting on a 70 x 150 foot lot on the west side of the street, this 3 story Georgian home has 14 total rooms, 6 bedrooms, and 5 1/2 baths spread over 6500 square feet and a 4 car garage. Here are a few other key stats on the Obama house:

I wonder if the size of Barack’s office relative to his bedroom is any indication of his priorities.

I found the following photo of the Obama house on Flickr: 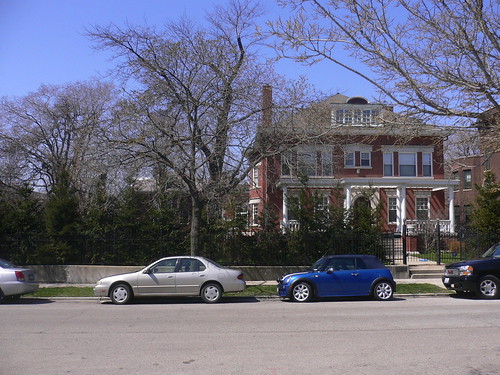 The empty lot on the left of the house is owned by Tony Rezko and has been the subject of much speculation regarding the relationship between Tony and Barack. The two properties were purchased from the same seller and closed on the same day, June 15, 2005. Subsequently, the Obamas purchased a strip of the empty lot from the Rezkos in order to expand their yard.

The Obamas got their home for $1.65 MM compared to a listing price of $1.95 MM. From the public release of the Obama’s tax return for 2007 we know that they deducted $58K of mortgage interest. So I assume they put a fair amount down on the purchase. The CCRD site has no record of this transaction. Perhaps it wasn’t recorded or some legal maneuver was used to avoid the public record. I do know that the transaction was done through a trust to maintain Obama’s privacy. So much for that idea.

I found a very interesting article from someone who lived in the Obama house many years ago. He provides an in depth description of the history of the house and what it looks like on the inside.

The picture above was obviously taken well before Obama won the nomination. The secret service and the Chicago police had not yet taken over the neighborhood. I drove past this area a few weeks ago and noted a couple of interesting things. First, there are signs on 50th St. about a mile away from the intersection with Greenwood requesting all trucks to divert. That seems reasonable except that I didn’t see any capability to enforce that displayed. Once you get to the intersection they have concrete barricades set up on Greenwood to prevent any vehicle from approaching the house and there were numerous Chicago police cars and officers manning the entrances. I didn’t see any donut eating.

If the Obamas decide to sell the place – it’s going to be vacant for the next 4 years – I would be happy to cut them a great deal on the commissions. I suggest that as part of the realtor vetting process the secret service should administer a lie detector test to any prospective realtors.

For those not familiar with Chicago here is a map showing where the house is: Special thanks to David Dalka, who runs an Internet Marketing strategy blog, for suggesting this post.

Hey Gary: Great post and photo on Obama’s house. I’m sure Chicago is buzzing with excitement over his victory. BTW, here’s a post we did on Barack:
http://www.zillowblog.com/barack-obamas-chicago-house/2008/09/

We did one on Palin: http://www.zillowblog.com/wasilla-alaska-real-estate-and-sarah-palins-house/2008/09/

Gary, I think you need to check the Recorder’s website again. I’ve had all the recorded docs for two years, and I just checked – all still there. No legal maneuvering to hide them from the public. If you have the MLS sheet, then you have the key.

I assume your comment about the size of the office versus the master bedroom was a joke — short of re-demising the interior layout, I guess their only alternative would have been to use the office as the bedroom and vice versa. By the way, the floorplans show the “office” as a “library,” for what it’s worth.

And an update on access along Hyde Park Blvd (51st) as it goes by Greenwood. There isn’t any. Even the CTA bus has to go down a side street.

Just one other note: the lot now has 80 feet along Greenwood, not 70 feet.

I found 3 different PINs associated with this property. None of them have the Obama’s name on them. The name that shows up under the PIN on the MLS is Frederic Wondisford.

Yes, my comment on the office size was humor. You have to know my style. How did you get floorplans?

Yeah, I imagine that the extra 10 feet is the strip purchased from Tony Rezko.

1. PINs for 5046 and 5050 at the time of their respective sales are now obsolete due to resubdivisions. 2. Obamas used a trust to buy their property, so their name doesn’t show up as grantee on the Recorder’s website. However, the transfer declarations have their names. 3. Listing broker’s website had floorplans, interior pics, and an online brochure. Don’t know if it exists anymore.

I’m an appraiser downtown. If you care to, e-mail me at the address I supplied in the log-in box.

Obama is a decent politician. One of few these days

Let’s not forget he said things like “The reforms we seek would bring greater competition, choice, savings and inefficiencies to our health care system.” – Barack Obama July 20, 2009. When taking out Bin Laden and passing a healthcare program (that 70% of Americans hate) are the only things worth running on… I’ll be amazed if a Democrat doesn’t take a run at this guy?

[…] President Obama may currently live in the White House, but he’s still a Chicagoan at heart. The South Side Chicago residence of the former Illinois senator is sitting empty, home to the president and his family on their occasional visits home. The three-story Greenwood Avenue brick house has six bedrooms and five and a half baths. […]

Obama and most of his friends are all part of the 1%….don’t forget that.